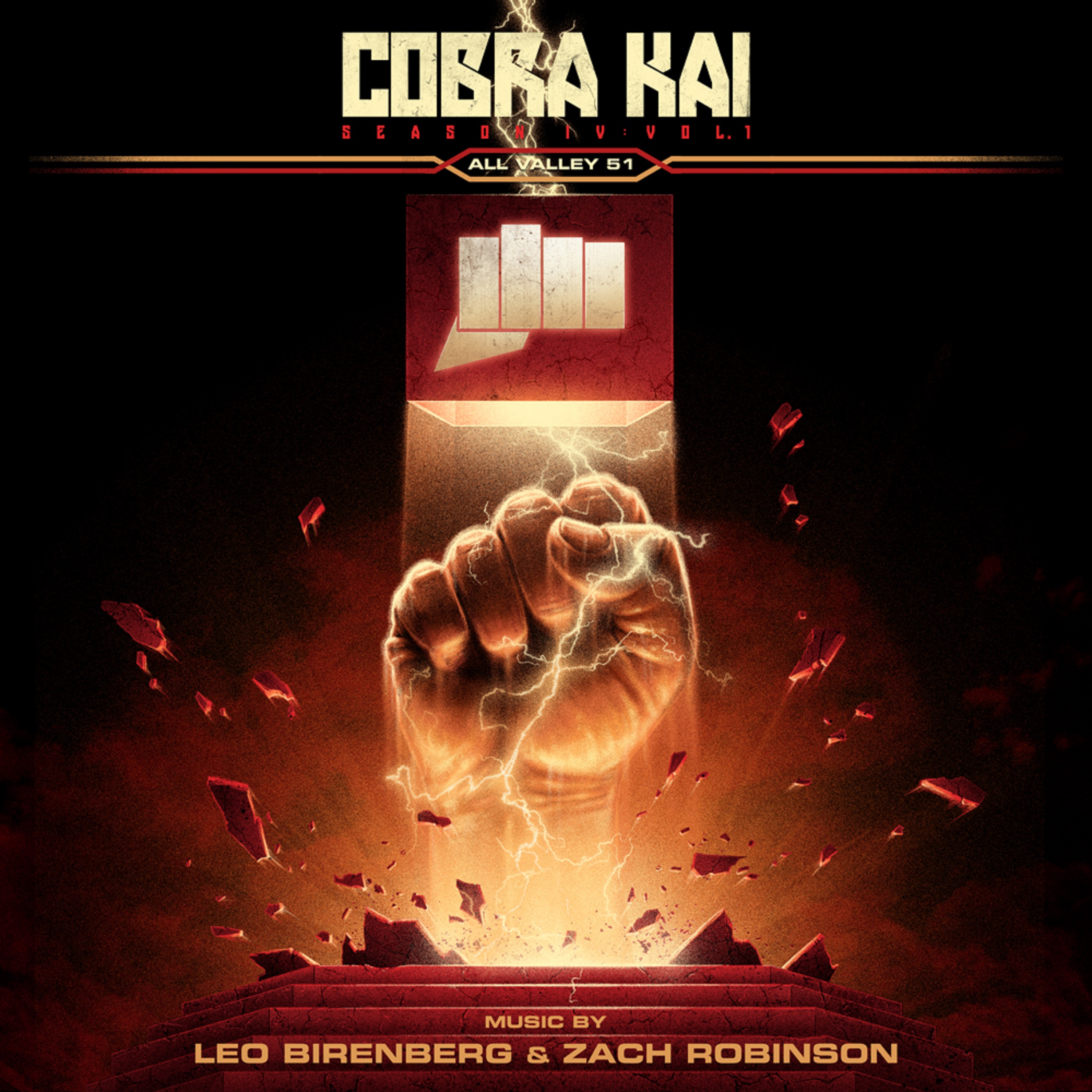 Featuring music by Leo Birenberg & Zach Robinson, plus an exclusive all new recording of “The Moment of Truth” by Carrie Underwood.
AVAILABLE JANUARY 7

CULVER CITY, CA (January 6, 2022) – Madison Gate Records announces the release of COBRA KAI: SEASON 4 (SOUNDTRACK FROM THE NETFLIX ORIGINAL SERIES)by series composers Leo Birenberg and Zach Robinson as a two-volume set with nearly two hours of music, plus an exclusive all new recording of “The Moment of Truth” performed by seven-time GRAMMY® Award-winning recording artist Carrie Underwood. Both volumes will be available everywhere on digital starting January 7, 2022, and as a deluxe edition 2-disc CD set through La-La Land Records.

COBRA KAI: SEASON 4, VOL. 1 “ALL VALLEY TOURNAMENT 51”(SOUNDTRACK FROM THE NETFLIX ORIGINAL SERIES) centers around the events of the 51st All Valley Tournament, featuring epic themes, crushing rock anthems and superstar Carrie Underwood’s cover of the classic 80s hit “The Moment of Truth.” Written by Bill Conti, Dennis Lambert, and Peter Beckett, the song was originally recorded by iconic 80’s rock band Survivor for “The Karate Kid” original movie soundtrack and played over that film’s end credits. Underwood’s turbocharged interpretation is produced by Birenberg and Robinson. Let’s go All Valley!

"We knew updating a beloved song such as ‘The Moment of Truth’ would be challenging, but from the second Carrie Underwood sang the opening lyrics, everyone knew she was born to belt this anthem,” said Birenberg and Robinson. “Working alongside Carrie and our amazing musicians was the highlight of our season 4 scoring experience and we're so excited for ‘The Moment of Truth’ to be listenable on our All Valley Tournament 51 album."

“I am such a huge fan of ‘Cobra Kai,’ and getting to appear on the show and perform Survivor’s iconic ‘The Moment of Truth’ for the season 4 penultimate episode and its soundtrack was truly an honor that ranks up there with my favorite things I’ve ever gotten to do,” said Underwood.

COBRA KAI: SEASON 4, VOL. 2 (SOUNDTRACK FROM THE NETFLIX ORIGINAL SERIES) offers superfans even more fist-pumping action and adventure from Birenberg and Robinson, showcasing the music that underscores the events leading up to the All Valley 51.

COBRA KAI takes place over 30 years after the events of the 1984 All Valley Karate Tournament with the continuation of the inescapable conflict between Daniel LaRusso (Ralph Macchio) and Johnny Lawrence (William Zabka). Season 4 finds the Miyagi-Do and Eagle Fang dojos joining forces to take down Cobra Kai at the All Valley Under 18 Karate Tournament... and whoever loses must hang up their gi. As Samantha and Miguel try to maintain the dojo alliance and Robby goes all in at Cobra Kai, the fate of the Valley has never been more precarious. What tricks does Kreese have up his sleeve? Can Daniel and Johnny bury their decades-long hatchet to defeat Kreese? Or will Cobra Kai become the face of karate in the Valley?

Leo Birenberg has catapulted to the forefront of TV and film music, one of the industry’s most sought-after composers. His music is featured in the cultural sensation Cobra Kai, Hulu’s PEN15, and Netflix’s Jurassic World: Camp Cretaceous. Working across a variety of genres and platforms, he has scored Disney+’s superhero film The Secret Society of Second Born Royals, AppleTV+’s musical Central Park, Adult Swim’s Tigtone, Amazon’s Kung Fu Panda: The Paws of Destiny, Fox’s Son of Zorn, TruTV’s Adam Ruins Everything, and the critically-acclaimed documentaries Red Penguins, In Search of Greatness, and Red Army. He recently scored the indie smash-hit Plus One, which won the 2019 Tribeca Film Festival Audience Award. Leo has also been a steady collaborator of composer Christophe Beck, working as a writer, arranger, and producer and has contributed additional music to a number of films, including Frozen, Edge of Tomorrow, Ant-Man, and The Peanuts Movie. He and Christophe recently worked together on Helter Skelter: An American Myth, a deep and grisly look at the life of Charles Manson, from award-winning filmmaker and documentarian Lesley Chilcott. Kentucky-born and Chicago-raised, Leo spent his childhood making movies and playing music, eventually combining the two by studying composition at NYU and USC. Originally a woodwind player and vocalist, Leo’s musical background is diverse, with influences from classical, jazz, bluegrass, show tunes, rock, world and electronic music. Leo currently resides in Los Angeles. When not composing, he enjoys working out, baking bread, and going on walks with his fearsome beagle, Napoleon.

Zach Robinson is an LA based composer, music producer, and electronic musician. Zach is most known for co-composing the score to the mega-hit Netflix series Cobra Kai, a sequel series to the classic Karate Kid film franchise, of which he has scored all four seasons. He is currently scoring the new CBS drama series Good Sam from Katie Wech and Jennie Snyder Urmann. He most recently wrapped scoring the desert thriller Run and Gun from director Chris Boreli. Zach was recently nominated for an LA Area Emmy Award for his work on KCET’s Artbound: Light and Space. Past projects include the Impractical Jokers movie, Roku original Die Hart, Norwegian comedy The Oilfund, ABC pilot The Hypnotist’s Love Story, and the video game Cobra Kai: The Karate Kid Saga Continues. After receiving his degree in music composition from Northwestern University, Zach cut his teeth working with acclaimed film composer, Christophe Beck, writing additional music for films such as Ant-Man, Edge of Tomorrow, Frozen, Hot Pursuit, Sisters, and The Peanuts Movie. Zach has multiple musical projects in parallel to his composing career. His 1980's inspired electronic music project, D/A/D, is considered one of the most accomplished in the synthwave genre and has received accolades from Pitchfork and NPR. In 2019, Zach released an EP of surf-rockabilly songs under the band name Ventura Dives.Zach's passion lies in the fantastic. He is a mega-fan of classic B-film horror, space epics, lounge exotica, smokey noir, buddy cop movies, and 1950's/1980's visions of the future. He currently resides in Los Angeles, CA.

Carrie Underwood is a true multi-format, multi-media superstar, spanning achievements in music, television, film, and as a New York Times bestselling author and successful entrepreneur. She has sold more than 66 million records worldwide, recorded 28 #1 singles (14 of which she co-wrote), and has seven albums that are certified Platinum or Multi-Platinum by the RIAA, all while continuing to sell out arena tours across North America and the UK. All nine of her consecutive album releases (two of which she co-produced) from the beginning of her career debuted #1 on the Billboard Country Chart, making her the only artist to accomplish that feat. She has won over 100 major awards including 7 GRAMMY® Awards, 15 ACM Awards including three for Entertainer of the Year (the first female in history to win twice and the only female ever to win three times), 23 CMT Music Awards (holding the record for the most award wins ever for the show), 7 CMA Awards, and 17 American Music Awards. She has also built a successful business portfolio inspired by her passion for health and wellness. She founded and created the fitness and lifestyle brand, CALIA by Carrie Underwood and her first book, FIND YOUR PATH was an instant New York Times bestseller. She launched her her fit52 app in 2020, and expanded her lifestyle portfolio with a partnership with BODYARMOR Sports Drink in 2021. Her first-ever residency, REFLECTION: The Las Vegas Residency, began December 1, making her the first artist to grace the stage of the state-of-the-art Resorts World Theatre at the brand-new Resorts World Las Vegas.